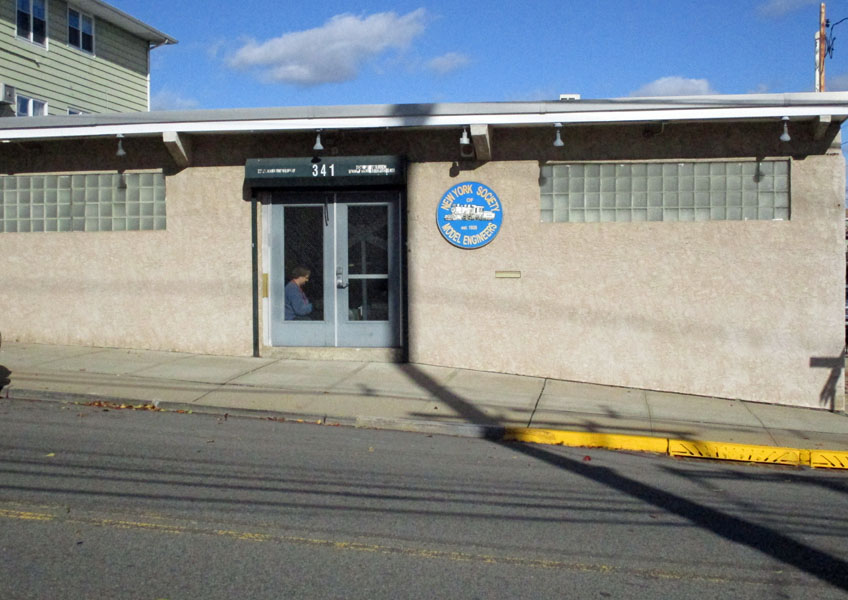 One of the oldest if not the oldest model railroad clubs in the United States is the New York Society of Model Engineers located in Carlstadt New Jersey. Twice a year in the fall and the spring, the club holds a swap meet at a local church hall in association with the Metropolitan Division of the national Train Collectors Association (METCA). It had been a number of years since I had attended the meet and even longer since I had been to the club so I decided to take out a bank loan to travel from Queens to New Jersey via the GW Bridge with the Mrs. to see what was available at the show. In addition to a very reasonable 5 dollar admission fee (wives and children were free), the members of NYSME were going to open the club layouts for attendees of the show. My last visit to the club was years ago when the existing HO railroad was taken down and the new layout was mostly in the benchwork stage. I also remember that the O scale layout seemed to be somewhat dated and was showing its age at that time.

The NYSME has a long and distinguished history and can trace its roots to the early 20th century. The society’s website lists the founding date of the club as 1926 and it was located at various locations in Manhattan until right after World War II when they moved to the Hoboken ferry terminal. Another move was necessary in the 1950’s when the post office wanted the space for a mail facility and that is when the present building was purchased as permanent location. The one story building houses both an O scale and an HO scale layout with very generous aisle space separating the two. The entrance lobby contains showcases where models are displayed and this area is flanked by a machine shop on one side and a meeting room on the other. Straight ahead and a couple of steps down you enter the main layout area and you are instantly amazed at the size and scope of the displays. The 2 rail O scale layout is along the left and back wall of the building and the HO layout is on the right and you really don’t know where to look first.

The first thing I noticed is how the O scale layout seemed to be all spruced up since I saw it last. The details abound from the rock climbers to the gas stations and the colors of the scenery really seem to pop. The members had several trains running flawlessly-from steam to diesel and freight to passenger, the heft of these O scale models make a quite impressive sight when they pass in front of you. Walking to the back part of the layout, you are struck by the depth of the scenery, especially in the yard area, a feature too often missing in the linear layouts of today. It causes you to stop for a minute to really take in the view and it looked like the lighting has been improved since my last visit as the brightness level seemed much better and complimented the scene.

My biggest surprise however was at the back end of the layout, where I remember a couple of city buildings and a small trolley loop. The area has been developed into a full O scale traction layout, with beautiful multistory city buildings, loops of trolley tracks and overhead wires powering numerous electric cars. The details really abound in this section- lots vehicles on the city streets, some parked and others making deliveries, a busy fire house, people walking, talking and waiting for the bus or trolley. Some were also enjoying the sun up on “tar beach”. Several cars were running down the streets and around  the buildings and I must have spent 20 minutes trying to absorb all the various details. I am an HO guy and I must say that O gauge traction is really impressive, made even more so by the depth of scenery that this layout allows. This is something that can’t be conveyed by the narrow O scale modules displayed at various shows, not that they are bad but that depth adds an extra dimension to the scenery. All I can say is fantastic!

On the other side of the room is the HO layout which had a few spots still under construction, mostly in the back part of the layout. It is almost an entirely new railroad from what I remember years ago but the one thing I was glad to see was that the operating hump yard that was located in the back part of the layout was now in a prominent place in the front. The yards and engine facilities are right in the front part of the room as you enter and they are loaded with details. You can also walk entirely around the perimeter of the layout so that you can get up close views of everything. The trains are now controlled by a DCC system using both plug in and some wireless throttles eliminating the need to operate from the engineers balcony. Members were getting things ready for the annual fall and holiday show, making sure everything was operating correctly and there was a good mix of steam and diesels running. My wife noted that there were a lot of younger faces operating the trains at the club (I was too busy staring at the trains to notice) and said it was a nice change from the usual much older membership demographic. The members were very accommodating to us, suggesting places good spots for photos and graciously stopping and posing locomotives at those places. All in all, a really great bunch of people.

If you are into railroad memorabilia, the NYSME has a large collection of tail signs that used to be on the back of the famous named passenger cars from years ago. These are all lit up and displayed on the valences that frame the top of the layouts, a very nice touch that you will not see anywhere else. Additionally, there were a number of step-ups around the viewing areas so that the little ones can get a really good look at the action.

This was a fantastic day all around. In addition to a good sized swap meet that was a nice mix of scale and tinplate trains ( I picked up an Atlas D&H hopper), the NYSME open house was great. Even my wife who just tolerates these excursions was very impressed by the operation and level of detail that the club has achieved. If you really want to impress the kids and grandkids, you have to take them to one of the club’s events. Check the NYSME website (www.modelengineers.org) for the dates and times of upcoming happenings and go- you will not be disappointed!