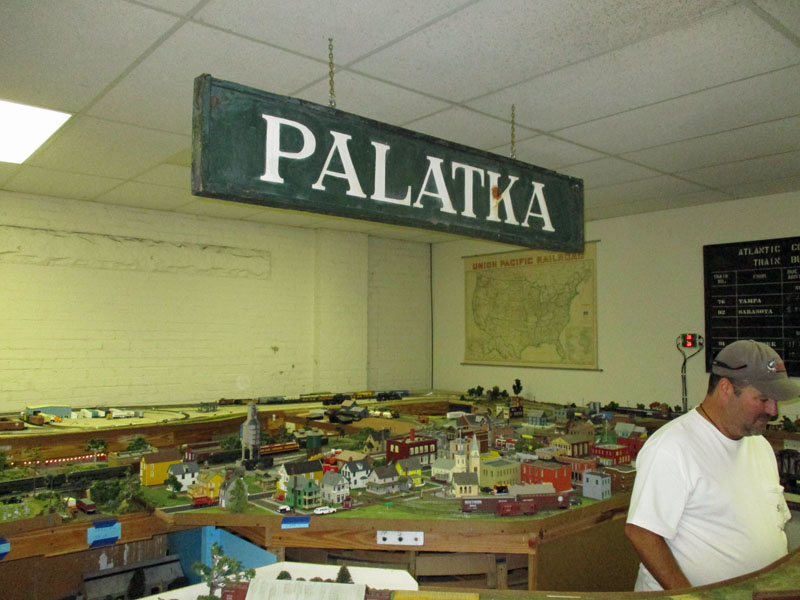 Each year I try to take a beach week around Columbus Day to my most favorite place in the USA, St Augustine Florida, the oldest city in the country. It’s a great time of year to go as the weather is still beautiful with temps in the mid to upper 80’s but the large crowds are gone- the nearest people to you on the smooth white sandy beaches are probably 25 yards away and the water still feels like a bathtub. You can also drive your car right onto the beach and after Sept. 30th.  there is no fee to do so. Usually around this time the city of Palatka Fl., about  30 miles from St Augustine, holds their annual Railfest, a small train show held in the community center next to the Palatka Union Station. In addition to the tables of train items for sale, the Ocala Model Railroaders (www.ocalamodelrailroaders.com) set up a very nice modular N scale layout at the show, the structures and scenery on which were well done and the layout was running  3 trains without a derailment. Of course a Florida layout must have the Tropicana Juice Train running and this was no exception. There was no admission charge to the show but a small donation would be accepted.

After the train show we walked next door to the City of Palatka’s historic train station, home of the Palatka Railroad Preservation Society (www.railsofpalatka.org). The station was built by the Atlantic Coast Line Railroad in 1908 and is on the National Register of Historic Places. It is very well maintained and has a beautiful red Spanish tile roof. While the station is not owned by Amtrak, it serves as a passenger train stop for the Silver Meteor and Silver Star long distance trains. The station houses the Browning Railroad Museum, a collection of railroad memorabilia and local rail artifacts  and other exhibits from this country and Europe. Continuing through the station, the Society has a model railroad housed in a 25 x 30 foot room that is meant to be a depiction of Palatka and the surrounding areas. The scenery is still under construction in several areas but the trackwork looks complete. It is stacked several levels high and is controlled with DCC and has sound and the members were running several trains while we were there.

Passing through the layout room into the back of the station, you enter a long dimly lit room that houses an HO model train display highlighted with spotlights known as RailRodeo. According to the website of the society, the layout is 32 feet long  and the various loops of track will operate 16 trains.  The display was built by Irvin P. Saylor, a retired newspaper photographer as a portable exhibition in a trailer and toured the east coast in the 1970’s. When Mr. Saylor passed away, the display was donated to the society. In addition to the numerous trains operating on the different tracks, there were many different animations to view at the same time and we spent a good 15 or 20 minutes looking at all the details.

Exiting through the back door of the station, there were several people with suitcases waiting for the Amtrak train to arrive. The Silver Meteor was due to come in at 10:40am and it was around 11 so we decided to wait a few minutes to see the train. In the meantime, I took a few shots of the caboose displayed on the grounds of the station, former Seaboard Coast Line steel caboose 623. The train still had not arrived, so wanting to get back to Virginia that evening, we decided to leave. It had been a very nice morning and about 15 minutes later as we were heading up route 17 to Jacksonville, we were passed in a hurry by the southbound Meteor looking to make up lost time. Hope to see you in Palatka next year!