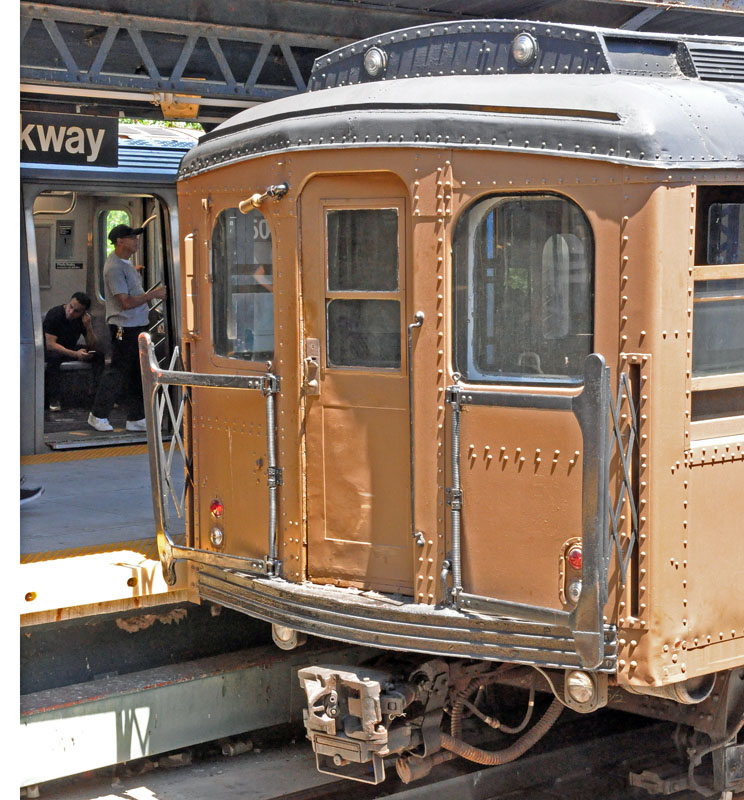 It is often said that in New York there is no such thing as a free ride but on Father’s Day weekend 2018, thanks to the NY MTA, not only the dads of NY but also the moms and kids were treated to free rides on the antique cars of  the New York Transit Authority’s museum collection. Usually when they run the museum excursions, it can cost you around $50.00 a head to ride the old subway cars for several hours to different locations in the city depending on the cars that are being run that day. But not today- this was really a freebie! I have been on a number of the trips over the years, beginning with the “Nostalgia Train” that would start at 57th street and 6th Avenue when that was a terminal stop and travel to the new Transit Museum in Brooklyn, stop over for an hour or so and then run out to Rockaway. It was a great way to decompress on a Sunday afternoon and many a fun afternoon was had.  But the Father’s Day event was a great new experience . 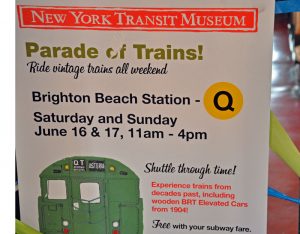 The one set of cars that I have never taken a ride on are the “Gate cars”, the really old elevated cars that have a long and complicated history and that have been nicely preserved by the museum. From their salmon colored roofs and brown pin-striped wooden sides to the rattan seats on the inside, these cars are the definition of transit history. The cars have been run on some trips but not frequently and my schedule never seemed to be clear for those few times. So when this opportunity came up, I was excited to go. They were not the only historic cars to be displayed however. The venerable BMT standards, the D type Triplex and the mixed train of many metals were all scheduled as part of the lineup. The ads for the event said the cars would be at the Brighton Beach station on the Q (Brighton) line where you could board them for ride to the Kings Highway station and back again.

Knowing the parking situation around the Coney Island area, I decided to take the F train to West 8th Street and then go up to the second level and take the Q 2 stops to Brighton Beach. It turns out there was no express service in Queens that Sunday so it was quite a ride-179th Street to West 8th Street is 54 stops. I was ready for a Nathan’s hotdog (or 3) and a beer but as the Q came into Ocean Parkway, that urge went away. Parked on the center express tracks was a 3 car set of BMT Standards, nicely painted in a milk chocolate brown with black roofs. There were several men on the tracks examining the underside of the cars and it looked like they were out of service. Sure enough, they did not run in the parade of trains that Sunday but just seeing them out in the sunshine in all their restored splendor brought back fond memories of childhood rides from Astoria to Coney Island in our bathing suits and the fun we had at the beach and on the rides. 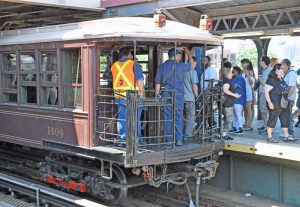 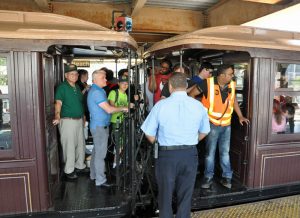 Returning to the Q train, I took it one more stop to Brighton Beach station and there they were, parked on one of the 2 center express tracks, the fabulous gate cars! On the other track was the 3 car set of the BMT D Type Triplex cars, painted in a similar scheme as the Standards. The doors were opened which allowed the crowds to walk on and inspect the cars, look at the old advertisments and sit on the rattan seats. But the bulk of the crowds were on the other platform, waiting to board the 3 car set of gate cars for the ride to Kings Highway and back. I was surprised at the number of people that the cars were able to hold, and quickly everyone was aboard and ready to go. The neat part was that the folks were allowed to stand on the platforms between the first and second and second and third cars for a real open air elevated train experience. Fabulous!

After the gate cars pulled out of the station, the train of many metals pulled in to discharge its passengers. The train was made up of a 2 toned gray with small orange stripes R-10 car in the lead followed by 2 stainless steel R-38 and 2 R-40 slant cars with on olive green R-16 bringing up the rear. A number of people on the platform boarded the train over the course of about 10 minutes, the doors closed and the cars left the station and rounded the curve headed for Kings Highway. A few minutes later, the gate cars reappeared and they slowly made the turn back into the Brighton Beach Station. Now it was my turn to take a ride! I think most of the folks were waiting to ride these cars and you could hear the sounds of astonishment as they started to board. They have really been nicely preserved-the rattan seats were all clean and intact, the windows all opened and closed smoothly and all the painted surfaces seemed complete. Almost everyone inside the cars had a seat, with a few standees hanging on to the leather straps attached to the ceiling, a throwback to the “straphanger days”. A good number of riders were allowed to stand on the open platforms and there was plenty of supervision to keep everyone safe and in line.  A couple of squeaky toots on the whistle and the train was off.  The deep growl of the traction motors could be heard loudly through the open windows as the cars worked their way around the curve and as they hit the straight track, the cars started to really move, the beautiful breeze coming into the cars and the growl of the motors turned into a much higher pitched whine as we hit our top speed. It was an experience that was entirely different than the modern, air-conditioned, fluorescent lit, digitally signed, canned announcement, see something say something subway ride of today. This was actually a very pleasant, relaxing experience.

The growling returned as we slowed to come into Kings Highway station and after a brief stop we reversed direction to return to Brighton Beach. Soon we were back up to speed and as we passed through the stations along the way, you could see the astonished faces on the regular passengers waiting for the Q train and the rows of photographers angling for the best shots. All too soon we slowed down and saw the train of many metals pass us on its northbound journey to Kings Highway and we slowly pulled around the curve and back into Brighton Beach. I spent about a half hour taking various photos of the different trains and then hopped on a northbound Q to one of the intermediate stations to get some shots. I got off at Neck Road and was able to get some nice shots of the Parade of Trains in action and then just sat for a while and watched as the old trains just came and went. Soon it was time for that Nathan’s hotdog so it was off to Stillwell Ave.

This was the first time I had been to Coney Island in many years and it was my first chance to see the new Stillwell Ave. terminal in person. What a difference- from the large trainshed- like roof covering the elevated tracks to the sleek new façade on the Stillwell and Surf Ave. sides, it is a fantastic improvement to the whole look of the area. But one thing has not changed- the great taste of Nathan’s hotdogs and their crinkle cut fries. It almost makes the 55 stop, two and a half hour F train ride home tolerable-almost. Maybe I should get one more dog to go.

Seriously though, thanks to the Transit Museum for a really great afternoon!