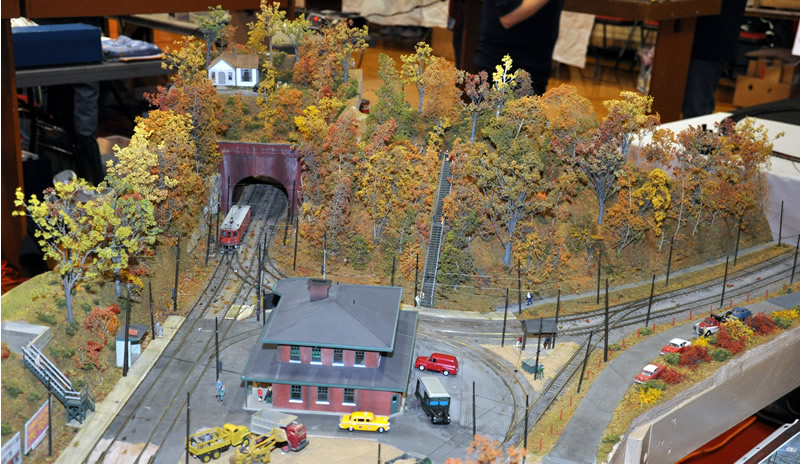 I finally made it to the Model Transit Convention on Saturday Oct 22 after fighting my way through the traffic but I was too late to attend any of the clinics that were held there. In spite of that, I have to say that this was one of the best shows I have attended in quite some time and was well worth the effort to get there (even though I didn’t win any door prizes). I was surprised at the large number of vendors who were in attendance that day and the variety of merchandise for sale was tremendous. There were all kinds of traction and rapid transit books available from multiple dealers and if you were looking for a certain photograph or slide to add to your collection, this was the place to find it.

There were several dealers who were selling memorabilia that would make a great addition to any train room and the selection seemed very good. I was looking for some trucks for my HO IRT subway cars and Mike Masino came through as usual. Every time I meet him at a show he always seems to have what I am looking for and this time was no different. He had a bunch of the trucks in cast metal and the price was right. I also picked up a nice steeple cab kit that was priced to sell. Thanks Mike! I can finally finish up the fleet.

The model contest featured some fine traction examples in several different scales including a nice Third Avenue trolley with an interior and passengers. My personal favorite however was the only entry in the structure category, the O scale movie theater built by Mr. Nate Gersten. I have to say that this was one of the nicest structures I have ever seen (and I have built my share of buildings) and even had the subway kiosk on the sidewalk. O scale rolling stock has a good deal of heft but the buildings, especially large city-types, are really impressive.

At the other end of the spectrum, the fellows from the East Penn Club (www.eastpenn.org) were there with not only some HO modules but with an N scale traction module that really caught my eye. I did a fast double take as I immediately recognized it as a model of the Ocean Parkway trolley underpass on the Church Avenue line that was in Brooklyn. It was very well done and the fact that the N scale PCC car ran so smoothly was really a treat to see. Bravo to a very nice bunch of guys!

The New York City Model Transit Association did a really great job of sponsoring this show and the proceeds of the show were to be donated to The Shore Line ( Branford)  Trolley Museum in East Haven CT (www.bera.org) so all around this was a very good day to be a traction fan. Hope to make another trip next year!