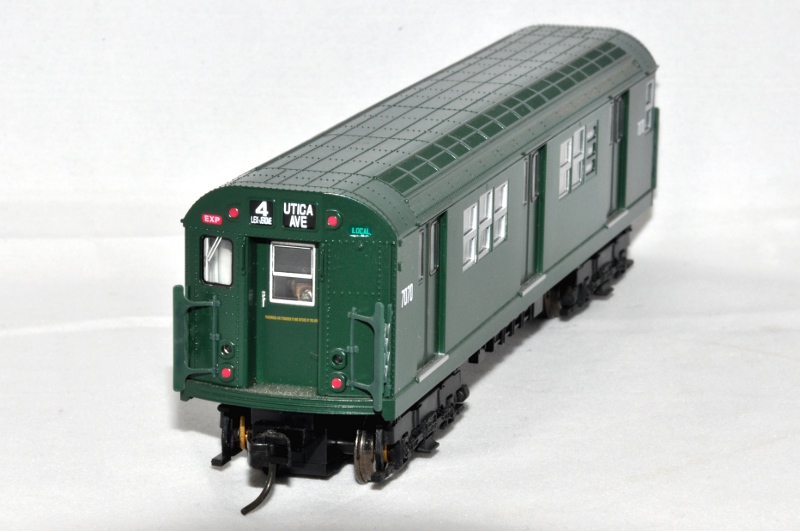 Until several years ago, anyone wanting to build up a fleet of New York subway rolling stock really had their work cut out for them. There were some old white metal kits, some resin or epoxy semi-finished models and the always hard to find and super expensive brass imports. One company came out with injection molded kits for IRT subway cars which built up into very nice models but you still had to figure out how to power them. Then LifeLike produced their model of the IRT R-17 car, ready to run as both powered and non-powered units. While these units really made it very easy to get a transit layout running in no time, there are some problems with them that a few modelers may not like.

The first several runs of the cars came without the signature spotting feature, the end safety gates. Subsequent runs that were released after Walthers acquired the LifeLike line did include this feature, but as told to me by the Walthers representative, the end gates are not available as a separate part to retrofit the cars. You can purchase the end gates as separate parts from several companies. IHP has photo-etched brass gates that are very reasonably priced. Image Replicas has an injection molded set that is listed on their website but while it may seem a little pricey it does 3 cars. Years ago Model Traction Supply sold white metal end gates for their R-1 and BMT Standard models; you see them at swap meets from time to time.

The main problem with the R-17 models however, are the dimensions. These cars represent the rolling stock of the IRT division which was built with narrower clearances than the BMT division. While IRT cars can run through the BMT, the opposite is not true. The width of the model is a scale 9 feet 6 inches instead of 8 feet 9 inches and the height of the car from the top of the rail to the bottom of the doors is 4 feet 9 inches, a full scale foot greater than the prototype. While the greater width is not readily apparent when running the cars together, it is noticeable when compared to equipment that is right to scale. From the front the cars resemble the wider BMT cars. The greater height from the rail head is noticeable and would take some major surgery to correct.
Now for the good news- these models have some of the finest details of any subway models produced, especially the rooftop vents and rivet detail which look terrific. The best part of all is the power mechanism- it is extremely smooth and powerful and will easily pull the 3 dummy cars on level track as well as inclines. So while there are some dimensional problems with the cars, the ability to quickly assemble a prototype consist that runs as good as it looks would seem to override any discrepancies. I don’t think you will be disappointed with these models.
See you next time when we take a look at some subway car kits.
Transit Bill